Recently someone called me a runner. They meant it as a compliment, but I was more perplexed at why they thought I was a runner. After all, haven’t they seen my posts with how long it takes me to run?

I barely consider myself a jogger. Yes, I completed a 50 mile race in Leadville and 8 marathons, but slowly. It’s hard for me to not compare my stats with everyone else. I hear about 6 minute miles and 8 minute miles … could I do that? Sure. Would you need an ambulance on stay. Most likely.

Granted, others have different goals.

Some are new to running and starting off strong, but I know that there is a plateau and mental challenges ahead for them. Some are running at a pace as though they’re training for a 10k which only gets you so far if you want to run farther. I don’t want to take away their motivation and let them know the 6 walls around the corner. Every distance has a different strategy.

Then I have friends that are elite runners … in other words, they win marathons. Those are the ones I wave to while they stand on the podium. That’s pretty cool stuff, but they are built differently and focus on being faster. They’ve made it a goal to be up there.

So what is running? The reference point that college students seems to use these days is Wikipedia, so let’s go there:

Running is a means of terrestrial locomotion allowing humans and other animals to move rapidly on foot. It is simply defined in athletics terms as a gait in which at regular points during the running cycle both feet are off the ground. This is in contrast to walking, where one foot is always in contact with the ground, the legs are kept mostly straight and the center of gravity vaults over the legs in an inverted pendulum fashion.

Again, that seems a bit open to interpretation.

Everyone starts running for a reason:
– To lose weight
– See if they can do it
– Work off stress

For me, it is still about seeing how far I can go. It’s not about how fast I get there, but seeing if I can make it to the destination. After all, if you move through life quickly, then are you really moving? When I run outside, I almost want to walk so I can take in the sights and the sounds. Living in the same state for 15 years, I am still amazed by the view of the Rocky Mountains. Seeing them at sunrise, from the top of a trail, or even running straight up them is an experience I would miss if I went “fast.”

It may sound like a silly wordplay, but when I show up on race day, I don’t say I’m there for a race. To me that would indicate I’m trying to beat someone or even win. What I’ve realized over the years is the only one I can compare myself to is me. Everyone at the race did not make training their priority in life. Everyone is at different levels. Everyone has a different level of health and age. I am only racing myself.

A race day to me is an expedition. It’s a chance to see new parts of the Earth, meet people, and listen to myself. Life is a journey and if we spend too much time on one thing, then we truly don’t live.

Here’s an image I found really describes how I view running: 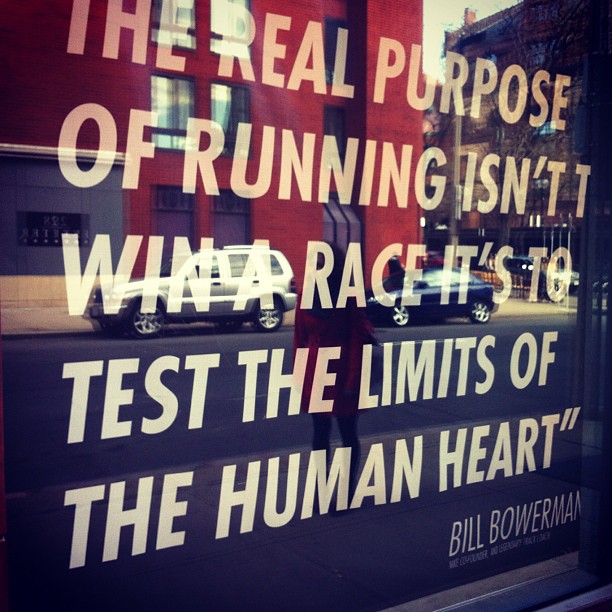 Are you a runner?