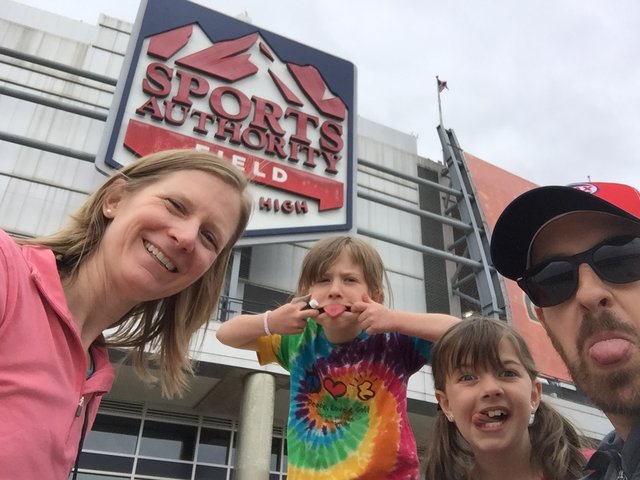 I really do love this race. It’s like a big reunion that you don’t know everyone, but yet feel like you do. The people have their own unique story of how their journey to the starting line and the finish line represents something more. For some, it’s a time to re-group with those they trained with, celebrate with family and friends, meet people they may only know from online, and others a start for something new.

As many of you know, I work with the team that spends 10 months out of the year planning for the Colfax Marathon weekend. This race is no fly-through-town event and takes thousands of volunteers to make it happen. Think about how much planning it takes for a company event of 100 people … now invite almost 20,000 people to run through 3 cities plus another 15,000 of their friends to party in City Park at the finish line. There’s a lot of planning to happen! Plus, there are many things that can, and have, go wrong that leave us with going to Plan B (or C, D, E …). I’m still working on a day that we create a documentary of all those adventures. If you didn’t notice anything went wrong and you had a great time, then we did it right. 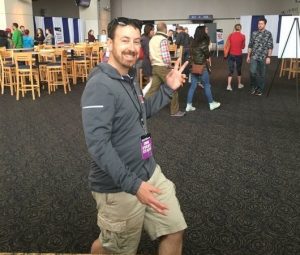 This year my primary duty was as the Director of Digital Marketing. Sound pretty vague? Well, if it involved communicated via an eletronic device, then it probably fell into my world. From sending out weekly email newsletters to posting about the race on Facebook, Twitter, Instagram to answering runner questions, I learned to carry my iPhone charger with me in the month leading up to the race. As a runner, it was great to provide the outlet for runners to ask questions, get tips, directions, parking, and all the other info you think of last minute before and leading up to a race. My family became used to seeing my face in my phone. Except at the dinner table. We have rules on that.

Once race weekend hits, I am dialed in. Friday morning I drop off my son at school and head to Sports Authority (what will the new name be?) Field at Mile High to prepare for 34,000 people to arrive. My area of focus is the Marathon Relay Zone. Over 1,200 teams with 5 runners a team … that’s over 6,000 runners coming my way! Fortunately, Mitch and I have managed this area for the past 3 years, so we have the flow down. New this year was we had the Colfax Marathon Ambassador Team as the primary volunteers! Thanks again Adidas for sponsoring this team! 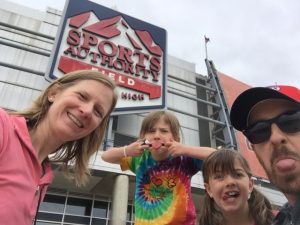 I go to a lot of other race expos and am a little disappointed when packet pickup is all of a 10 minute experience. Granted, there are times when I don’t want to deal with people and go do my own thing. Colfax, however, gives you best of both worlds. My wife came down to pick up her packet and brought our 2 youngest with her. We had a blast walking through the Expo and only had an hour to get through. We could have spent double that! Yes, the aisles were a bit tight between vendors and at times felt a little like Mardi Gras. Fortunately, runners for the most part are pretty easy going people. There was plenty to do, people to talk to, and stuff to check out. We bought t-shirts and a sweet Colfax/Runner’s Roost trucker hat … sorry, they sold out fast! 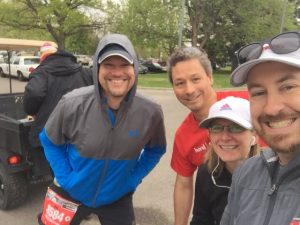 Race morning called for a 4:30am wakeup call. Babysitter arrived at 5am along with our buddy Jim. We drove down about 40 minutes to the Denver Zoo so we had a parking spot. Plenty of time to do a firts pass at the porta-porties (plenty of them!) and over to the Volunteer Tent to hang out with some other Ambassadors. Ran into other friends like Matt, past Ambassadors, and future Ambassadors (application opens end of July!) Also answered runners’ questions at the tent … force of habit here. Weather was just about right for a t-shirt yet you wanted to keep moving in order to stay warm. Oh yeah, there’s Boyers Coffee there for free coffee! 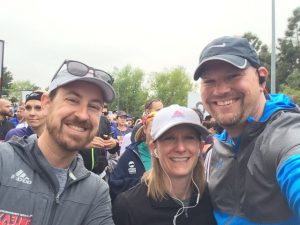 After listening to the marathoners take off, we headed over for one more stop at the porta-potties. Again, pretty fast compared to other races! Casually walked to the corals, saying hi to more people we knew from the race, run groups, social media, and friendly faces.

Side note … if you want to do your first race, this is probably one of the most friendly places to do it. Everyone is encouraging and it feels more like a family reunion. That one time you had a family reunion when everyone got along, things clicked, and you had things in common to talk about while not being overly dramatic about minute things. A really good time! 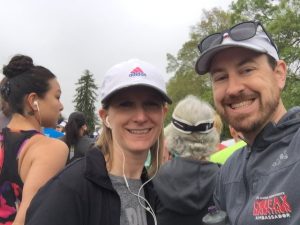 After a beautiful rendition of the National Anthem, the first coral was off and running! A casual walk for 10 minutes or so and it was our turn to cross the starting mat. There was some cheering and yelling from the stage (I knew everyone on it) which is always a great way to start a race.

We made sure to start out at a nice easy pace so that the rest of the miles would be more enjoyable. Don’t want to blow a gasket in the first mile and then spend 12 miles spouting curses to the world. That still happens around mile 8 or so. 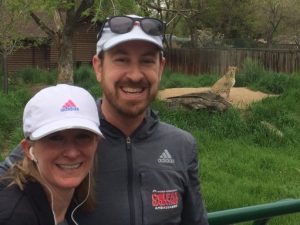 It’s about 2 miles until we get to the Denver Zoo entrance. This is probably 1 of 2 reasons why people run this course. It is the only race allowed to run through the zoo and the look on the animals’ faces show that. They seem just as surprised to wake up to breakfast only to have thousands of people running through their front yard.

So many cool pictures to take like this one of us with the cheetah sitting on the rock. He was enjoying the show and making sure we were all aware he could easily run faster than us. It’s a very different feel and view to the zoo when you’re running around it before the gates are open to the public. Like a VIP tour that everyone is stopping to grab photos. 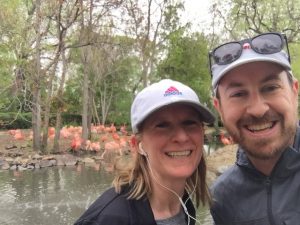 Through the zoo we caught a glimpse of the elephants. It would appear they were not early risers this morning. They’re elephants. Pretty sure they can do whatever they want and not many are going to make them change their mind.

The zoo is always a fun run through and people are happy to slow down to enjoy the view. It’s one of the moments that remind me I don’t call these races. Sure, there are many that really do race and win. For others, it’s about racing themselves. At times though, we should all slow down and enjoy what’s around us. Community, flowers, animals staring at you. 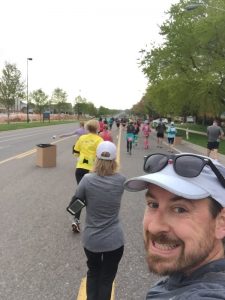 Over the next few miles we wind and curve down nice shady streets. I do my best to make weird faces, sing outloud, and talk to others that can’t hear me because their headphones are cranked up. Or maybe they’re ignoring me. I don’t know but I’m finding the pace pretty easy and they’re not. So maybe they’re just mad at me for having so much fun.

Nobody going to stop me from having fun in life!

A couple more miles of running around Aurora and it’s time to run through a fire station! The police and firefighters are always really energetic and calling out names that are on bibs. Not an easy thing to do standing there for 4 hours with that kind of excitement! They’re handing out high-fives and smiles. 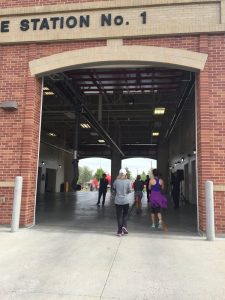 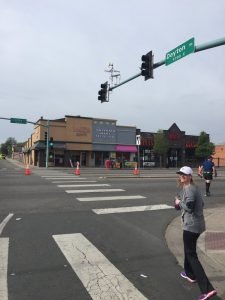 After the firestation and under the Clif Bar arch we go! About a half mile down the street past a fleet of motorcycle police officers we hit Colfax. I took the picture because my wife is from Dayton, Ohio and here we are in a half marathon at the corner of Colfax and Dayton. I find amusement in simple things.

Turning right onto Colfax and for the next mile provides me a chance to improve my Spanish. Lots of stores, signs, and billboards in a language I didn’t learn in high school. Sorry, I took French because I grew up on the border of Quebec. Which is where the drinking age was 18. You’re welcome for that tidbit of knowledge.

Up ahead we can see the giant American flag that is hung over the road by two fire truck ladders. 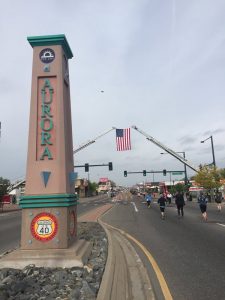 There was a time that I had a fear of heights. Looking up at the top of those ladders as I run under them makes those fears come back. They are high! Just the thought of climbing those makes my knees shake. Or it’s the running. Going with the heights.

The next couple miles are straight ahead and chatting with people along the way. Fortunately, it’s a nice rolling downhill and the weather was fantastic.

This course is always fun because you never quite know what you will see on the course! 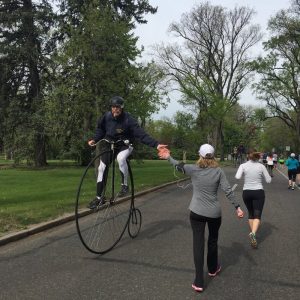 Then there are moments you know are coming on the course. For instance, Mile 11. This is what many register for the half marathon for. Either the Denver Zoo, or the guys from the Colorado Firefighter Calendar. You can tell when you are close because anyone that was walking before then suddenly gets an extra burst of energy. Here’s what you get: 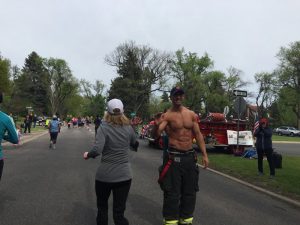 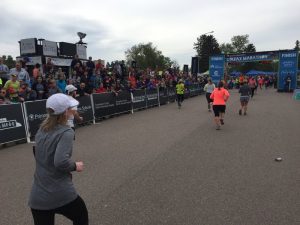 From there people are pretty happy and you can see the city as we make our way to the park. That’s also a downside as you can see the finish line on the other side of the pond. Then again, for many, it’ll make you move faster to get there! About half a mile from the finish we merge in with the Marathon and Marathon Relay runners. The crowds get bigger and the finish line chute is always exciting with the bleachers of friends and family members waiting for their runner.

After crossing the finish line, a firefighter presents you with your finisher medal. 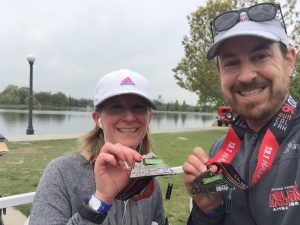 A very cool medal by the way! It stands up on its own and you can spin the Colfax street sign that has the distance on the back. It is refreshing to do a race that doesn’t have the same medal each year and only changes the ribbon attached to it!

Post-race party … the live band was a blast and fun to dance to! Well, many did the marathon shuffle dance where you kind of move side-to-side without lifting your legs. 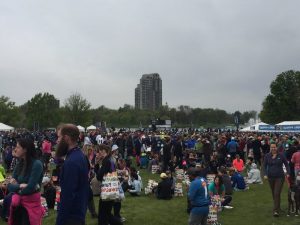