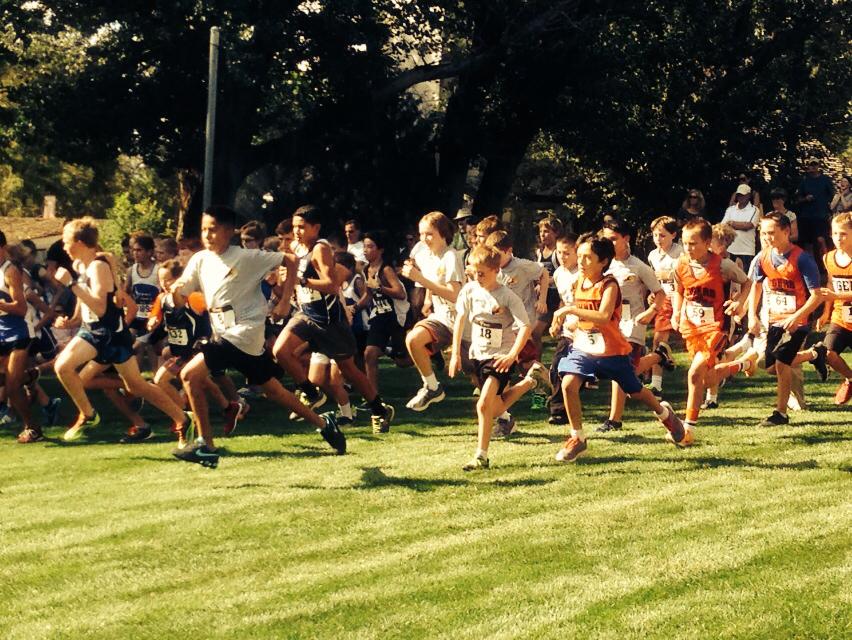 To be clear, I have never suggested to my kids they should take up running. I’m not one to push activities on the kids, but give them exposure to as much as possible. If something moves them or gets them excited, then I’m 100% behind it. 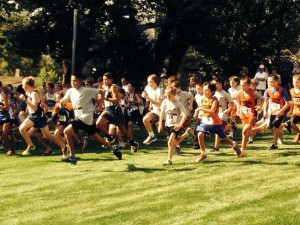 My 11yo son had his first x-country running meet this week. This is the same one that came to crew me at the Leadville 100 this year, so he has had exposure to a different kind of running. In Middle School, the race are 1.5 miles long, while in high school it’s 3 miles. His coach said he runs at the front of the pack during training and my son has told me how long those runs take.

My intuition was that he would be in for a surprise and new experience.

The race was on a golf course. It would almost figure eight style so I’d see him at the halfway point.

Him and the rest of the team circled-up and did their stretches. It was 90 degrees outside. Standing in the sunlight felt like someone pressing an iron on my skin. Get the water ready for post-race!

There were probably another 6 schools participating in the meet. Each school got a piece of the starting line and my son moved to the front. As they all took off down the hill, about a quarter mile in and I saw him still towards the front. After that, they went over a hill and ran the perimeter of the golf course, so it was hard to see where he went. 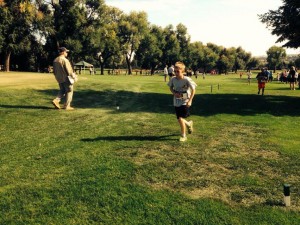 Son: My side hurts.
Me: Run faster and it’ll go away.
Son: I feel like throwing up.
Me: So throw-up and you’ll be able to run faster.

Yeah, I got some looks from parents.

As he went on by, I said all the ridiculous things I say to myself 30 miles into a race:

Just pick up your knees.
You don’t have to run, but you can’t walk. Even jog a little.
You only have to run for 6 more minutes.
Pass someone and you’ll feel better.
You can have as much ice cream you want after you finish.

About 100 feet from me he went back to a walk. I saw him circle the perimeter and noticed he was chatting with someone from a different school.

(my inside voice)Make friends after the race! 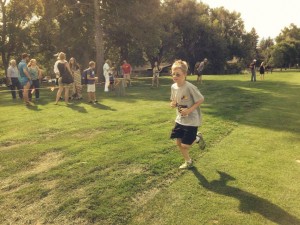 The last 300 feet of the course is a slight uphill. To an 11yo running his first race in 90 degree heat, I imagine it felt more like a mountain.

I was very happy that he crossed the finish line strong. While he may have walked, he never quit. Even with, in his words, “felt like my stomach was going to blow-up and my hip cramped,” he continued forward. Not something every kid would choose to do.

After the race, I received a reminder of how much running is mental. I heard all the excuses possible about why they didn’t go as fast as they expected. From headaches to it being hot to stomachs to legs to my feet hurt … wow. I made a comment about this to my son on the way home and he asked how to learn the mental part. Told him to read my blog!

In reality, the mental part of running comes with practice. It is a different way of looking at situations and appreciating where you are. Then do a quick risk analysis of your body to determine if anything is life threatening. Okay, maybe I didn’t do the best job of that at the 2013 Leadville 100 Mile Trail Run, but I learned from it.

Running is about learning how to deal with challenging situations, practicing those encounters, and moving forward.