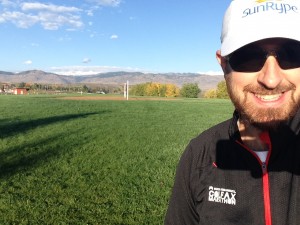 I told about 5 people that I registered for this 100 mile run. It was really about me seeing if I had a distance problem or an altitude problem. Pushing through pain hasn’t been an issue for me. After all, I pushed myself to the ER in 2013. My goal was to see if I could go the distance without the challenge of altitude.

Oh yeah … and see if I could go 100 miles without the whole training part.

In fact, I took that as a challenge to make this even harder.

Here’s a snapshot of my pre-race dinner: 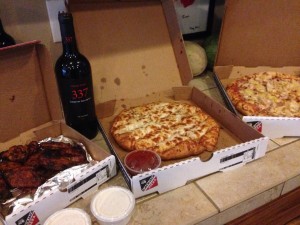 Pizza, wings, and wine. Go find that in a training plan book. 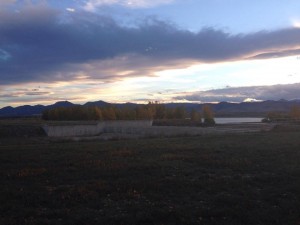 The race started at 9am on a Saturday morning. A benefit to this is sleeping on a normal schedule. No waking up before 3am to get to a starting line. Typical morning of pancakes and coffee for breakfast. Relaxed and ready to run.

This event takes place at the Boulder Resevoir which immediately provides a scenic backdrop to the race. The 100 mile course is 14 laps of out-and-back 7 mile trips.

I’ve already been told that’s stupid, you’re crazy, how can you stand that, blah blah blah. For me, that setup has its advantages:
– Strategize when to push hard
– Know when the turnaround is
– Get to know everyone in the race

That last one is very true. You could line up a group of people and I could tell you if they were running in this race.

Also due to the out-and-back, I don’t have a lot to talk about the race itself. Met some interesting people … Corbin from Texas, Darrin from Boston, Nick from Nebraska, and Todd from Arvada. The conversations helped the miles go by!

Reid and his team at Gemini Adventures put on a great event. There may have been a total of 100 runners on the course and we were all well cared for. Volunteers recognized us quickly and kept up the encouragement into the sun going down. Creative food at the aid stations also help hit the hunger spot!

This run was about some me time. I have made some changes as I wrote about and this was a time to think about those. Verdict: absolutely made the right changes! I just wanted to get some miles on my feet. Did I really think I would complete 100 miles? Nah not really. Unless stars aligned and magic blue unicorns rode by, I knew it wouldn’t be the full 100.

The weather during the day was spot on. For about 20 miles it was almost too hot, then 10 miles of crazy wind. Around that mile 30 mark, ran into some familiar faces from Leadville, Heidi and Jeremy. They asked how I was doing and I mentioned sleepy. Jeremy gave me his Red Bull which I chugged for the next mile. That did the trick for a good 5-6 miles!

Around mile 38 I tried something new at the aid station: chicken wings! When I first saw them I thought no way. Then I decided extra calories couldn’t be a bad thing. Wow they hit the spot! Calories and protein in a tasty bite.

One of my goals was to run at night. That meant I would be running for at least 10-11 hours. My pacer Derek would be joining me at that time and I had been wanting to catch up with him for awhile.

When Derek and I started running together, we had 50 miles to go. Halfway complete in 12 hours. More importantly, I had surpassed my farthest distance of 50 miles in one day. Already success on the day.

We spent the first 2 miles talking up a storm! It was great to chit chat about work, kids, running, and life.

Before no time at all we were at the turnaround. I grabbed a few chicken wings and an S! Cap then was off. About a mile later is when things starting getting weird.

I’m fine when muscles knot up, I get hungry, or decide to vomit. This time though, I started yawning. That’s kind of weird. Yes, I was 54 miles into a run. Exhaustion is one thing, but in my head, yawning means something else … lack of oxygen. At the second dam crossing, I actually stopped and sat down. Derek stared at me not quite knowing what to do. Hell, I didn’t know what to do. I felt like curling up in a ball right there on the trail and taking a nap. Instead, forced myself up and agreed to get back to basecamp.

Once at basecamp, I took off my right shoe and sock to take a look at a blister. Derek grabbed me a cup of coffee and cup of soup. I just kind of leaned forward chatting with Nick who had finished the 100k. He had a blank stare of exhaustion on him. Been there before.

So here I am sitting on a bench, right sock off, eating soup. Normal Saturday night, right? 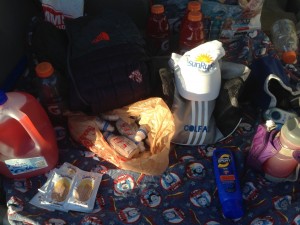 Got Derek to agree to let me take a 15 minute nap in my car. Another bonus of this course is that you can back your car right up to it. Each lap just stop by, pop open the back, and have access to all the supplies I could bring. Once we got to the car, I pushed my supplies to the side, and slid right in. Derek laid out on the grass and we set the timer for 15 minutes.

Not sure if I slept or not, but felt good to get off the feet. After 15 minutes, got up, filled bottle, and headed down the road. In about half a mile, actually started running. It felt good!

For about 2 miles. Then the yawning started again.

At the turnaround, I grabbed more coffee and some chips. Heading back out was good for a mile, then the yawning started kicking in again. Then, I started noticing the chest discomfort. Heart wasn’t beating fast, but felt like it was working really hard. Kind of like my chest muscles were really tight and I couldn’t get in a full breath. Like getting a constant bear hug.

Derek: How about we run a little?
Me: No.

7 seconds later I would start to jog a bit. I don’t know why. Maybe because it hurt my feet and hip flexors less when I was running.

Then the chest thing got more noticeable.

Once back at basecamp, I laid down on one of the cots. I took my The North Face Thermoball jacket and used it as a blanket. Damn that thing is comfortable. I said let’s give it 30 minutes.

After 30 minutes I sat up. Immediate bear hug feeling. Done.

I woke up Derek and told him what was going on. 64 miles was a record and pushing it harder didn’t seem worth it. One option was to lay here for a couple hours, but getting up after that would probably include seized up legs.

And at mile 64, my body tossed up some red flares saying it was time to call it a day.

Based on how I felt the following day, I still don’t second guess my decision to stop. I am pretty happy to have a distance PR as I went 64 miles. That’s slightly more than a 100k. I’ll take it!

From a nutrition standpoint, I feel like it was all spot on. Urine was the perfect color and I kept up on my eating. It’s this exhaustion thing I need to figure out. Within the next month, I will be meeting with a cardiologist to get some answers. I have already done a bit of research and asking around. I’m not alone in the symptoms I’ve described, so there is hope I’m not crazy.