For Christmas, we decided to replace the 15 year old treadmill. It has been a good treadmill and gone thousands of miles. The screen hasn’t worked in 4 years so I assume it has been thousands of miles. Each time I look down at my feet, I see the part of the belt that connects together slowly coming apart. Visions of the belt snapping and me flying back into the roughed-in framed wall run through my head.

I know, I live in Colorado and should not ever be running inside. Sometimes, you know, with wife, 4 kids, full-time job, consulting business, and other people’s schedules, it’s not possible to get outside. You know.

Looking for a treadmill is a lot like buying a car. Do you really want a used one? How much has it been beaten up? Have you ever lifted a treadmill?

Side note … Look for a weight bench.

I only had a few requirements:

Then I started reading about this software called iFit.

I’ll be the first to admit that I’m a gadget guy who loves products. Guess it’s a good thing my day job is creating them. It fascinates me how things work, and don’t work, in the everyday of the world. What seems like an obvious solution to me results in painful hours of explaining, justifying, and arguing to others why I’m right. 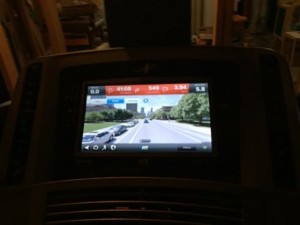 This iFit thing, you can download Google Maps to the treadmill and run anywhere in the world. The treadmill will change incline based on where you are running. For the treadmill I found, the console had a 7″ color screen that showed Google street view as you were running the course. There were pre-loaded courses like the Boston Marathon, by the Pyramids of Giza, and city scenic tours. Hooked!

I placed the order for the treadmill that would take about 2 weeks to arrive. It said the box would weigh just over 300 pounds. For another $100 I could have the delivery drivers carry it to whatever room I wanted. Add another $300 on top of that and they’ll assemble it. Really? Was there soldering of motherboards involved here?

As soon as the delivery truck pulled up, my wife sent me a text message that it was here. I told her to flash her pretty blue eyes and see if they would take the box to the basement. They got it in the garage. I knew that was the first sign that I would learn what “heavy” meant.

When I got home from the office and opened the garage door, it was like someone dropped the coffin of Andre the Giant in my garage. I had a flat furniture dolly that I figured I could use on one end while I pickup the other and push.

There are only 3 steps from the garage into the house. Each one took about 12 minutes to move the box up. Once in the house, things got a little easier.

I would like to thank whomever invented the wheel.

Once to the door to the basement, I had gravity on my side. Let the 300+ pound box slide down the stairs, stand it up, move it around the 180 degree turn, and drop it back down to slide the rest of the way.

Then I was reminded about force.

I braced the box down with my back, dropped it on my toe, and slide it over my knuckles. Nothing like a good handful of blood to show your son how to move a box.

After that, it was the normal scene of unpacking all the parts and trying to identify them. My oldest daughter came down to help with the assembly. She is quite smart and has a keen eye for solving problems.

Things were moving along great until step 6. This was the step to attach the large console to the support bars. Trouble was, the frame that it said to attach it to was nowhere to be found. We went through all the remaining parts and accounted them for future steps. No sign of this frame that needed to attach a pretty important piece. We called it a day as, not surprisingly, there were other things to do.

Then at 6:32am, I had an idea. I went to the basement in my barefoot (don’t do that) to continue construction. Buried in the back of the console was the frame already attached. Information that would be good to know in the instruction sheet. Or maybe some overachiever at the factory thought they were helping out.

Well, about 45 minutes later the new treadmill was christened.

Since then, I have run parts of the Chicago Marathon, along the coast of Scotland, and around Rome. There is also a feature that allows me to go online and draw my own map. First one I drew started at Portland Head Lighthouse and traveled 8 miles down the coast to the Twin Lighthouses in Maine. Beautiful scenery, but I don’t get the benefit of running at sea level part.

I will be getting outside more often, but nice to know I can run around the world anytime from my basement.