The first half of the year I chalked up to life. Kids activities, school happenings, and work. That right there fills a great deal of time. I squeezed in my favorite road race which is the Colfax Half Marathon … Running with my wife through the Denver Zoo, through the city of Denver, in and out of a fire department, and receiving a unique medal. Can’t complain, got in some good exercise. Even at the same time while gaining some weight.

About 5 months of the year is easy to explain … ankle got destroyed trying to jump a river. Was such a nice day in June for a trail run with a friend. Recovery took 3 times longer than I hoped, but still squeezed in a 30 mile mountain run during that time. That run ended with Derek’s comment “dude your ankle is swelling through your sock!”

Come October though, return to running wasn’t happening. In fact, it was making me completely exhausted.

On Halloween, I did the Eerie Erie 5k (takes place in Erie, CO) and had a great time hitting a 17 minute/mile pace with my 6 year old. No real effort, not going for time, and just enjoying time with her. A couple hours later, I’m passed out on the couch from exhaustion. Weird. That night, my body requires 12 hours of sleep. Really weird.

This goes on for a couple more weeks while stress level and demands of work increase. Then on a Tuesday night in mid-November I crash. I come home from work and lay down on my bed. Not because I want to sleep, but because I don’t have the energy to hold my body up any longer. The thought of picking up my phone to do Christmas shopping sounded exhausting. Even the kids noticed. What the hell was going on?

I reached out to some people on the running team and was referred to a sports doctor. Blood tests were ordered and I was in a chair having tubes of blood filled for examination.

About a week later I received a call on my drive home from work.

Doc: “It appears you have hyperthyroidism.”
Me: “Wait, hyper and not hypo? Then why am I so exhausted and gaining weight?”
Doc: “Well, we like to see your TH3 between 0.8 – 2.0 and for endurance athletes around 1.0. Your test came back at 0.03.”
Me: “Woah. You don’t have to be that good at math to know that seems bad.”
Doc: “It could be that you pushed yourself so hard that you went past the point of hyper symptoms into hypo as well.”
Me: “A quick flashback of race reports tells me I had hypo symptoms a year ago where walking up stairs made my heart rate spontaneously go through the roof.”
Doc: “Normally one event can push you over the edge and reveal itself. Next step is to see an Endocrinologist and get a fully checked out. Want to make sure it’s not something worse up the chain in the pituitary. If it’s the thyroid, they’ll probably give you a pill to take.”

I’m not well-versed in calling for doctor appointments or even talking to doctors. I always feel like I need to rush because there are so many people more sick in the world. So I began calling around for an Endocrinologist to see in the next week.

If you’re laughing at this point, then that means you have tried to get an appointment with an Endocrinologist. On a side note, should you want to go to med school, specialize in endocrinology as there appears to be a demand.

At first I called offices around where I worked in Denver. Then I called doctors in cities to the east and west. After that, far north … And far south to Colorado Springs. The person answering the phone cheerfully at each location informed the doctor was booking 2-3 months out. Holy. Crap.

I asked one assistant, “do you know if there are Endocrinologists in Emergency Rooms?”

Finally, I located a doctor that was only 5 weeks out. Hooray! Still, 5 weeks of feeling like a zombie. Well, at least a zombie can move around more than me.

A couple days later we had our next workout with the personal trainer. I just couldn’t see how to do it. That’s probably when my wife really knew there was a problem. Walking was a struggle and I thought that trying to do squats with a 100+ pound bar on my shoulders wasn’t all that safe.

I still went to the gym and supervised the kids on the rock wall. After the training session, the personal trainer came over to me.

PT: “so you’re not feeling well? Your wife told me what’s going on.”
Me: “I just have no energy, no zip, feel dead.”
PT: “Let me ask you, how much coffee a day do you drink?”
Me: “I don’t know. Maybe 4 cups depending on the day.”
PT: “Guessing some stress at work? You have 4 kids so that’s probably not a cakewalk.”
Me: “Yeah I guess. Work has been more unrealistic than usual.”
PT: “I think that you have taxed your adrenal glands to the max. I want you to try something. Cut out all caffeine for the next week. Go to Whole Foods and pick up a little bottle of Ashwaganda.”
Me: “Okay.”

People at work noticed it. I was laughing again and not stressing out. Maybe I was laughing at things I shouldn’t have been too. The Ashwaganda helps get your system back in check. If something is too high it dials it down, something too low it brings it back up. Helps the body deal better with stress and provides natural energy. 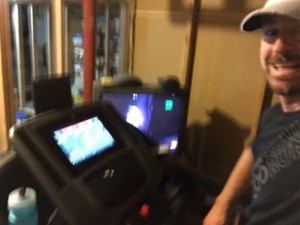 Now I can run again!

In the meantime, I’m still waiting on the appointment with the Endocrinologist. At least some having a name to what has been going on for the past 1 or more years means there is a plan in the works of what to do next.