Running is a lot like life … things are on the right path and with a simple twist, all of it goes off track.

Come to find out, it wasn’t just a simple twist for me. 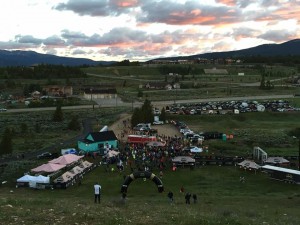 When we last left the story of my ankle crash, I had transferred my Silver Rush 50 registration to 2016 and crewed Derek through his first ultra there. It was somewhere on the drive home Derek asked how my ankle was doing. Truth was it got worse throughout the day. At the start of the day, I was pretty excited that I was able to climb the hill and capture some great photos/video of the start. My hobble became more apparent throughout the day.

The next morning I woke up to more pain in the ankle … and face. I made one of the common mistakes of a crew member … I didn’t take care of myself. At some point I know I put on sunscreen, but when you’re at 10,000 feet above sea level, the oven is set to broil. My face, arms, and legs were red. Not like blushing red, but like someone slapped you hard and the red isn’t going away red.

When I arrived at the office, I was pulling myself up the stairs. Between the pain from the ankle and energy the sun sucked out of me, I wasn’t doing so well. I made it to my stand-up desk (jab at myself) and began to go through schedule for the day. A week ago I had put the request out on Facebook for orthopedic doctor recommendations ad received many responses.

It was time to call a doctor.

I choose one of the suggested doctors and made the call.

Me: I hurt my ankle 2 weeks ago and it’s not getting better.
Scheduler: We have an appointment in an hour or on Thursday.
Me: I’ll see you in an hour.

Most people that have known me for years raised some eyebrows. The fact that I was going to a doctor at all is unusual. Choosing to cancel all meetings for the morning and quickly (as quick as I could) head across town said something. I was running out of options and wanted to make the starting line for a 100 mile race I was scheduled for in September. 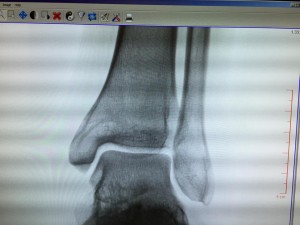 At the doctor I filled out all the paperwork, was directed to a room, and went in for X-Rays. It wasn’t long before he was in the room and we were looking at the results. He saw a line along the top left of the ankle bone (I know that’s not what it’s really called) and was perplexed. He took my ankle and tried to move it around.

Doc: You have to relax your ankle.
Me: Trying.

Doc: Does that hurt at all?
Me: Well yes.
Doc: Hmmm … seems like that should hurt a lot more.
Me: Well, pain is a line that can move. I can tell you some stories of ultramarathons I’ve run.
Doc: There are a couple things that concern me, so I want to put you in a walking boot for 2 weeks and get an MRI. And I can see by your face how excited you are.
Me: I’m holding out hope for a race in September still.
Doc: Well, let’s get the boot on, do an MRI to see what the tendons look like, and see you in 2 weeks to see how it’s progressing. 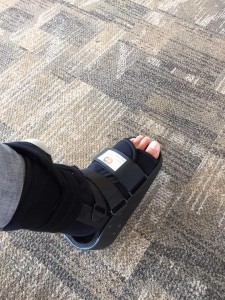 Another person came in with a boot that had the classic Reebok air pump system in them. I strapped in my ankle and give it a test drive around the room.

Translation: Good luck stopping me from that.

Turns out he was right. I had so little desire to do any kind of activity letalone exercise. My body was clearly in healing mode which meant 10+ hours of sleep each night with an occasional daytime nap thrown in. Watching what I ate, in other words less calories, was a challenge.

My attitude the next 2 days was pretty annoying. I knew my demeanor and patience was bad, but how others put up with it is beside me. Part of my job in the office is keeping morale up, so normally I have the jokes. Must say I was pretty disappointed with the lack of creativity …

Co-worker: Now we can make fun of you and you can’t catch us!
Me: I’m going to use my one good foot for something other than chasing you.

Co-worker: Are you already putting on weight?
Me: Look, running was probably the only thing stopping me from smacking you and now you’re poking me.

Lots of comments on the boot. I got to wear it to a baseball game, Darius Rucker/Brett Eldridge concert, and on a business trip. Never before have I been so injured it took me out of everything.

Probably the hardest moments came from text messages from friends …

Friend: Hey you want to go running tomorrow on our usual trail?
Me: I physically am not able to run.

Responses were mostly shock. I have no trouble pushing through pain or difficult situations. That’s what ultrarunning is all about.

Getting an MRI. Whoever invented this process must have either been a master of meditation or someone that specializes in torture. The entire experience sucked. When I went in, the tech said I would need to lay completely still for 20 minutes or they would start over. I can’t stay sitting in a chair for 15 minutes in a meeting and you want me to lay still inside this loud machine? Oh, they gave me headphones playing a soft rock station. About 7 minutes the conversation in my head was around if I liked soft rock.

At the 2 week doctor check-up, I had already told myself that I’m done with this boot. I knew that I was nowhere near healed as every step was still tender.

Doc: The MRI revealed the ACL is fully intact and tendons are all connected. It also reveals you have deep tendon tearing and inflammation in the bone.
Me: Yeah, I can feel that.
Doc: Good news is that surgery is not needed. What I want to do is keep you in the boot for another week. I can see that you are very excited about that.
Me: No, I get it, I’m just doing math in my head as I have 100 mile race in mid-September I’m holding out hope for. I already postponed a 50 mile run due to this injury.
Doc: Well, you would have a month because after a week in the boot, 2 weeks of only low-impact exercise. No running.

Look at the doc getting all specific about saying “no running” to me. Did someone call him?

So now I wait 3 weeks for another checkup. Swelling is going down which increases the chances he gives the thumbs-ups. Funny thing is, I know I can’t and shouldn’t run at the moment. Until I go a full day without pain in the ankle area, I’m not running.

I just got my taper out of the way early.