“Wow I can’t believe you went 30 miles up and down 2 mountains on that ankle!”

Looking back at Run Rabbit Run 100, I am well aware I was in the worst shape I have been in over the past 6 years. No running for 3 months and increased stress levels of life is a bad combination. Still, I was curious for an adventure.

While my ankle was the ultimate decision for stopping, there were other physical signs of needing to stop. Those became more apparent about an hour after leaving the course. IT Bands, hips, quads, and glutes all let me know they were mad. At the same time, they were happy to be kickstarted again. The following day I was in the rec center pool with my kids. It was good for the body to move without the strain of gravity.

Somehow, the doctor’s office lost my appointment for Monday. Probably just as well as he would most likely say rest and ice it.

Monday morning someone at the office thought it would be funny to say “hey quitter.”

Now here’s the thing … when you put a high level of stress on your body and deprive it of calories, the ability to control impulses begin to vanish. The emotions, and depression, following an ultramarathon, are real.

Fortunately, I didn’t pick up the chair next to me and hit him in the face with it. Although a poll later revealed all employees in the room would have been okay with it.

After a week of not a normal stride, I went to the physical therapist. Again, I was greeted by the “you want farther than I was expecting” conversation. Yep, I’m an idiot, I do things that are hard, and don’t run away from a challenge. Pun intended.

He went through his usual “scraping” of the ankle to move fluid out and break up scar tissue. Nothing too unusual and all was as expected. 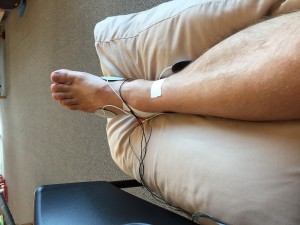 Then he hooked me up to electricity.

This was pretty cool! Four little pads were added around my ankle/foot area. Then he handed me a control that determined intensity of the electricity.

PT: Turn this up to as much as you can handle.
Me: What’s the record?
PT: Ummmm … that’s not the goal.
Me: Damn. Guess we’ll find out!

Before we started with the electricity, he wrapped my ankle in a cold blanket. I started cranking up the dial until it felt like my foot was going numb. Electricity pulse through it with up and down rhythms. After about 5 minutes, the tendons around my ankle/achilles started twitching. It was like they were coming alive for the first time and it was cool!

Once we were done, it was a little challenging to walk as my heel that had been sitting on the cold blanket was numb. I worked my way out to the car though and didn’t take long to warm up in the Colorado sun.

Later that night, as I was heading up the stairs, I noticed a difference. I had mobility back in the ankle! What once felt like a metal donut ring strapped around my ankle, was suddenly fluid again. I quick stepped back down the stairs and couldn’t believe how good it felt!

The next day at the office, I was not thinking and moved down the stairs fast passing a co-worker.

Co-worker: Slow down you’re making me look bad!
Me: Oh you have no idea how happy that makes me to hear!

I’m by no means recovered, but tomorrow will run the Hot Chocolate 15k with my wife. 9 miles on pavement shouldn’t be too bad as won’t have roots, rocks, and cliffs to worry the ankle on.

This has been an interesting year of challenges, but has also provided a great deal of new learning experiences!